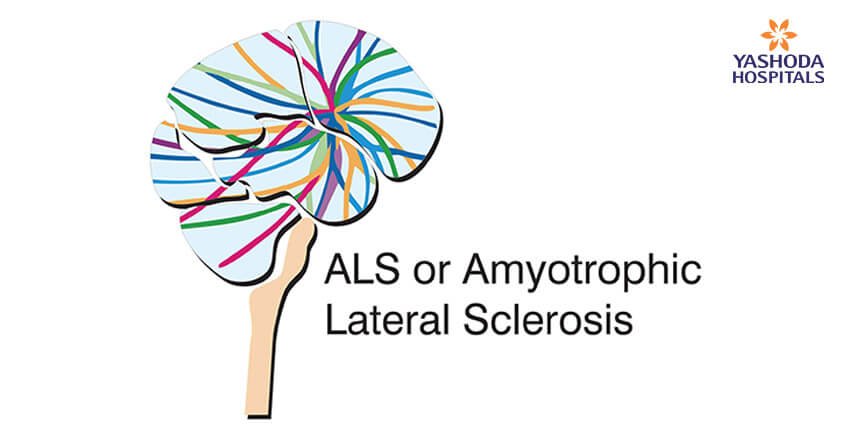 A motor neuron disease, also called as Lou Gehrig’s disease, which is named after the famous baseball player.

ALS or Amyotrophic Lateral Sclerosis is a nervous disorder that is marked by muscle weakness and physical dysfunction. ALS also has different names like, Lou Gehrig’s disease, which is named after the famous baseball player, and motor neuron disease. This condition features breakdown and death of nerve cells. The exact reason for the occurrence of ALS is not known, even though some ALS cases can be categorized under hereditary conditions.

ALS in majority of the cases occurs randomly. In few cases, it may be inherited. Possible causes of ALS include, gene mutations, chemical imbalances in the body, disorganized immune response system, and protein mishandling within the nerve cells.

ALS begins with hands, feet and limbs and finds its way to other parts of the body. Nearly, all parts of the body, which aid in movement are affected viz. chewing, swallowing, speaking and breathing. ALS often spares bowel or bladder control and different brain’s functions.

Though there are different factors that may contribute to the condition of ALS, some factors like smoking, lead exposure, trauma and intensive exertion present a potential risk of ALS. Exposure to certain chemicals over a period of life, like those in military life, may trigger the development of ALS.

The complications of ALS are evident as problems while breathing, eating and speaking. Dementia or loss of memory may also be seen in a few. Most fatal are those concerned with breathing, where the muscles that cause breathing to happen are struck by paralysis.

A non-invasive positive pressure ventilation is advised for correction. In extreme conditions, tracheostomy is the only way out. A hole is created in front of the neck that leads to the trachea. An artificial respirator helps in inflating and deflating the lungs.

Different types of tests are advised by the doctor as part of the comprehensive diagnosis of ALS condition. The EMG or Electromyogram helps to evaluate the electrical activity of the muscles. Nerve conduction activity assesses the extent of nerve damage. MRI or Magnetic Resonance Imaging uses radio waves and other powerful magnetic field to take images of the brain and spinal cord.

MRI helps to identify spinal cord tumors, and herniated disks in the neck. The lumbar puncture process involves insertion of a small needle into the lower back vertebrae, and draws cerebrospinal fluid for testing. In certain cases, a muscle biopsy is also advised as part of the complete diagnosis process for ALS.

ALS cannot be reversed or cured. It can only be treated to slow down the progress of symptoms. Treatments for ALS condition, demands an integrated approach, with prominent role played equally by the doctors, support staff and family members of the patient. Advanced treatments are available for ALS condition, wherein the patient’s survival is assured, and the quality of life is enhanced.

Medications and drugs as part of the treatment for ALS target muscle cramps, spasms, constipation, fatigue, salivation, phlegm, pain, depression, sleep problems and uncontrolled outbursts. Different types of therapies are also advised by the doctor, as part of the ALS treatment process. As part of the breathing therapy, an artificial tube is connected to the lungs. Physical therapy focuses on low-impact exercises like cardiovascular fitness, stretching, and adopting a range of muscle strengthening activities.

Occupational therapists provide support on assistive technology and computers to patients who are weak. The demands of daily activities that involve dressing, grooming, eating and bathing are adequately met. While the speech therapist can be of great help to learn adaptive techniques in speech practice. The family support for ALS patients is indispensable. It means not only emotional support but also positive thinking and greater health consciousness on the part of the individual in distress.

Yashoda Hospitals’ Neuro Institute adheres with highest standards in neurology and neuro surgery. The Institute is equipped with dedicated neuro ICUs and managed by a team of experienced neuro specialists. The Institute is renowned for introducing the intra-arterial thrombolytic therapy for Acute Ischemic Stroke.

All you need to know about Liver Transplantation

Life before, during and after heart transplant