×
Home>>News>>Madhulika, a 17-year-old minor girl returns home after her struggle for live at Yashoda Hospitals, Malakpet

Madhulika, a 17-year-old minor girl returns home after her struggle for live at Yashoda Hospitals, Malakpet

Hyderabad, 20th February, 2019: Madhulika, a 17-year-old minor girl, was hospitalized to Yashoda Super Specialty hospitals, Malakpet after being brutally attacked on February 2, 2019 with a crude weapon. On arrival, the patient was unconscious with non-recordable blood pressure and significant blood loss. She was intubated and supported on ventilation and immediately attended by team of doctors including neurosurgeon, vascular surgeon, plastic surgeon, general surgeon, orthopedic surgeon, spine surgeon, and ER physicians. Blood products transfusion was started and patient was shifted to ICU. Patient was transfused with multiple blood and products as her HB was around 3 gm% and was continuously monitored by critical care team.

Patient sustained 15 deep cut injuries over her head, neck, face, back and both upper limbs. CT and MRI studies indicated traumatic brain injury, skull fracture and vascular compression. After stabilization of her blood pressure, patient was taken up for surgery on February 7, 2019. Multiple surgeries were performed including skull fracture fragment removal, revascularization of near-amputated little finger, debridement and suturing of muscle-depth injuries over a period of more than 7 hours. Her vitals were stable in the peri operative period so she was shifted to ICU.

Patient was conscious and was extubated after couple of days. As the weapon used was contaminated, patient had septicemia. Patient was treated with appropriate antibiotics and infection was controlled. “She was kept in ICU under the supervision of 15 doctors, round the clock with regular physiotherapy and proper nutrition.” Dr. G. Vijay Kumar, Chief Operating Officer of Yashoda Hospital, Malakpet explained.

Today she is able to walk, eat, understand and recognize. She is being discharged today, after 15 days of hospitalization in stable condition. She will recover over a period of time with proper nutrition and physical activity. She requires regular follow up at the hospital as advised. Post discharge precautions and complications have been explained to family members. 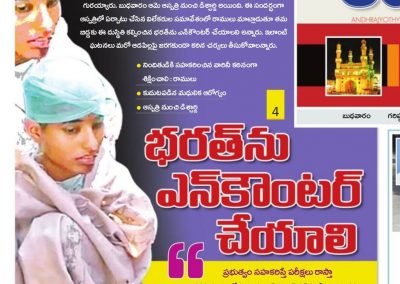 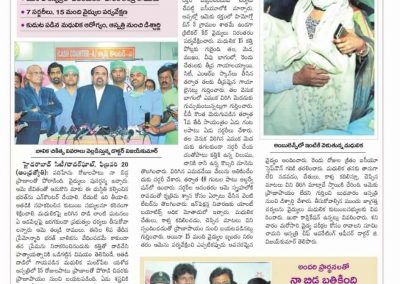 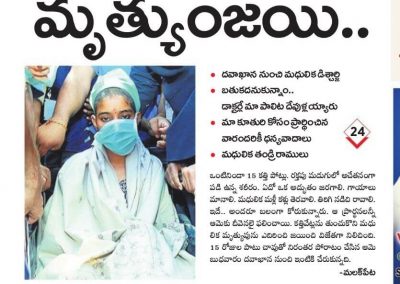 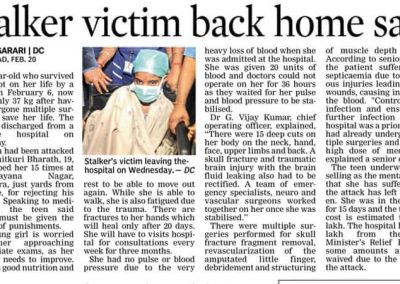 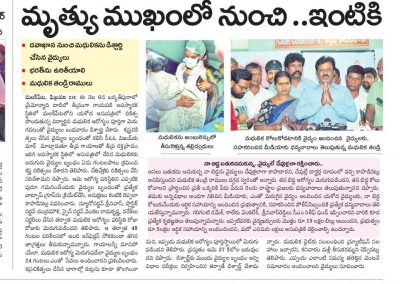 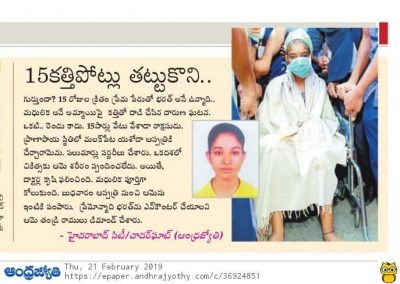 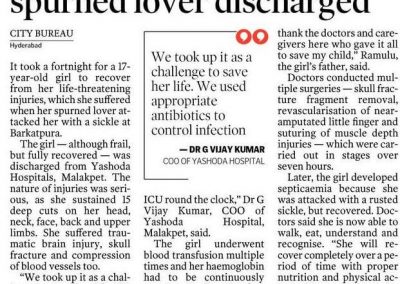 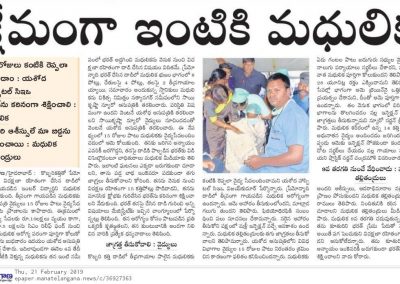 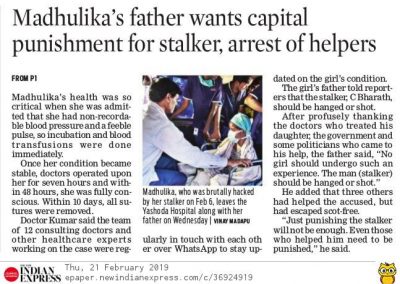 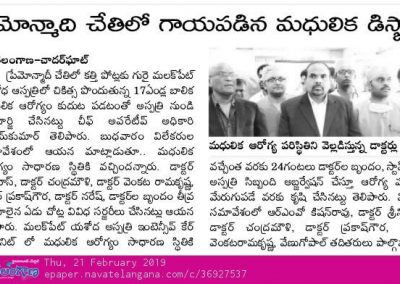 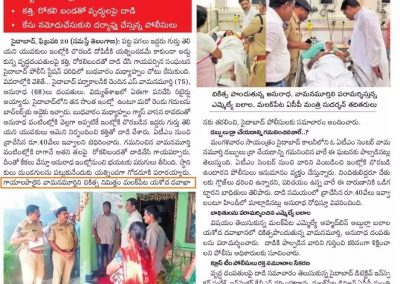 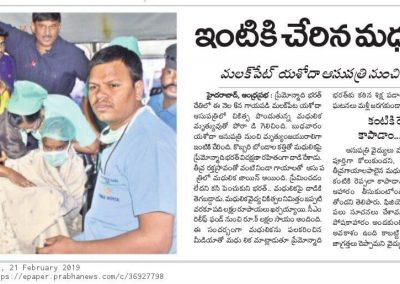 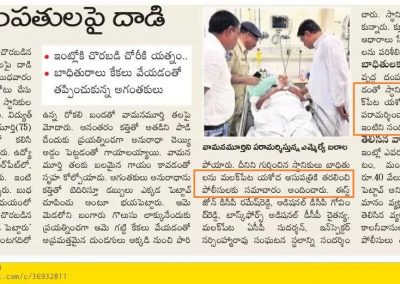 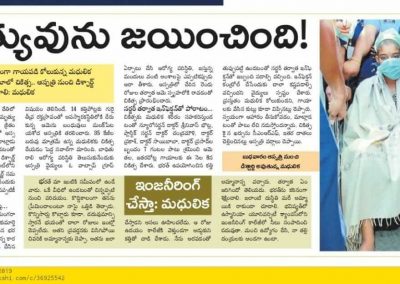 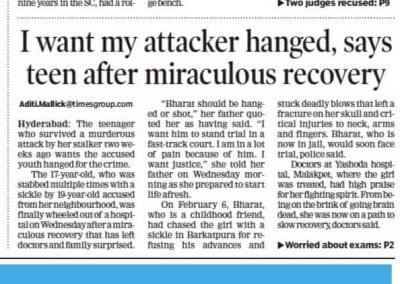 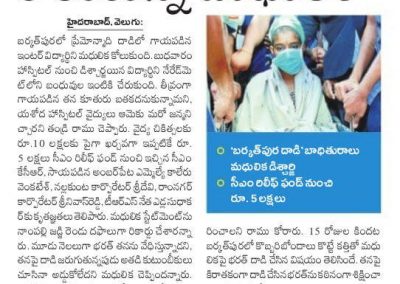 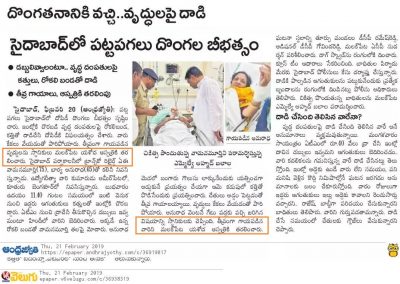 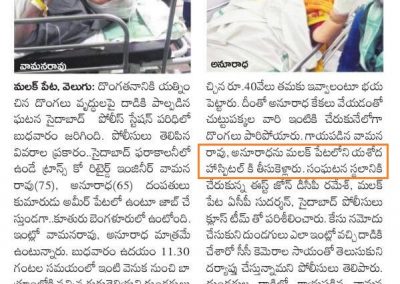 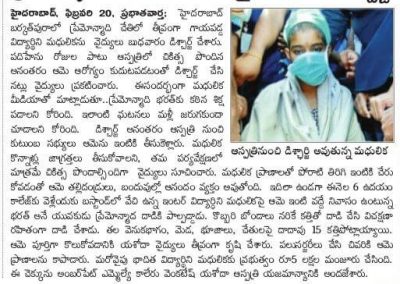 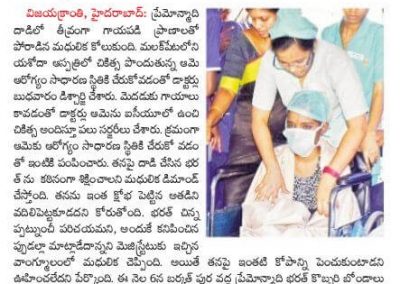 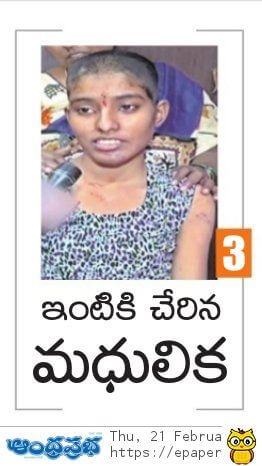 First international intraoperative neuro monitoring conference with LIVE workshop at Yashoda Hospitals
×
To give our visitors a better experience and relevant information, We use cookies. We do not collect, store or share any personal information unless explicitly provided by our visitors for the sake of availing our services. By clicking “Accept All”, you consent to the use of ALL the cookies. However, you may visit "Cookie Settings" to provide a controlled consent.
Cookie SettingsAccept All
Manage consent